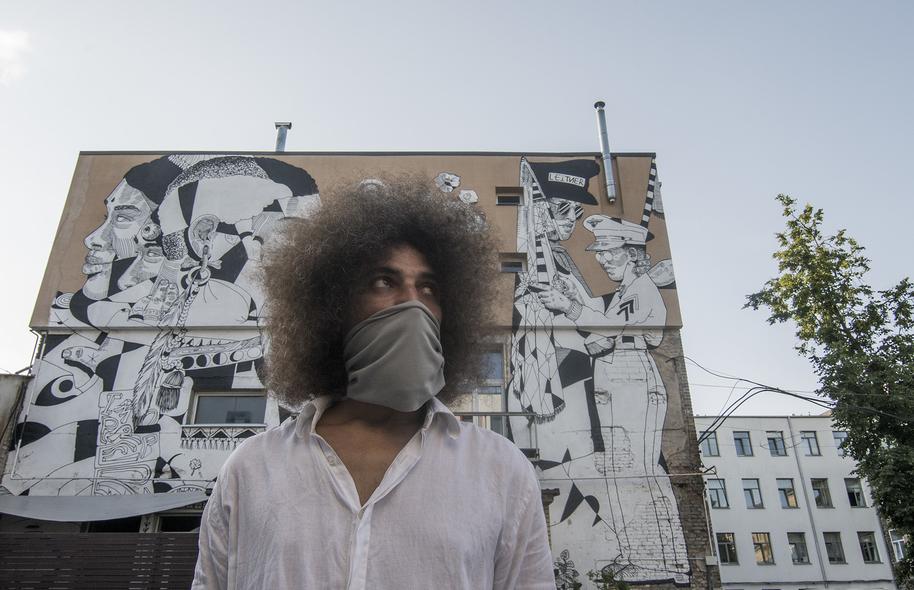 Afrodelic is the solo project of guitarist and producer Victor Diawara, who is currently adding the finishing touches to his debut album ‘Dusunkun Hakili’ (The memory of the heart), due for release in October 2020. The collection of songs is a tribute to Diawara’s father, well-respected Malian writer and poet Gaoussou Diawara, who passed away in 2018.

Born in Lithuania, raised in Mali, Victor lived in Germany and Ireland before permanently moving back to his mother’s home country Lithuania in 1997. Here, he formed Skamp – a band which became wildly popular in Lithuania at the end of the noughties. Skamp have released 8 albums, performed around Europe, won a number of music awards, and were twice nominated for the MTV European Music Awards.

A household name in Lithuania, Victor is also a successful music producer and runs one of the country’s most important alternative venues – art factory Loftas, where he hosts gigs starring the most interesting local and foreign artists (Editors, Toro y Moi, Kelis, Fink and many others have played the venue, which is also the home of Lithuanian Europavox events).

Formed in 2018, Afrodelic is a new step for Victor, an intriguing mix of African music and electronic rhythms. The first single ‘Le Temps est venu’ (The Time Has Come) is released today, and like the rest of the forthcoming album, it features lyrics by Victor’s father, acclaimed Malian writer Gaoussou Diawara.

A poet, novelist and author of numerous pieces of writing on European and African theatre, Gaoussou Diawara was a professor at the University of Mali, where he taught at the faculty of letters, arts and humanities. He was a Knight of the National Order of Merit of France, as well as a Knight of the National Order of Merit of Mali. Gaoussou Diawara was awarded the UNESCO Prize for Poetry and the 1976 French RFI Prize for L’aube des béliers (The dawn of the rams) at the Inter-African Theater Competition. He also became president of the Union of Malian Writers and president of the Malian Center of the International Theater Institute.

Like most of the songs on the album, ‘Le Temps est venu’ was recorded in Bamako, Mali with local musicians and singers. Victor then reworked the recordings, adding electronic sounds and rhythms in his studio in Vilnius.

Although the lyrics were written in 2009, they seem especially important today, in light of recent events and Black Lives Matter protests.

“My father was very motivated by the Civil Rights Movement in the 60’s and taught me about African history and the effects of colonialism in Mali,” Diawara explains.

“I believe we live in a time when silence is not an option anymore. But I also believe in non-violent activism just like Martin Luther King Jr. propagated.”

“The lyrics are very meaningful in the Black Lives Matter context. But I would also like to not forget that they were written about the African youth who are in desperate situations in many parts of Africa. Bad governance, corruption and dependence on foreign first world countries are still very big issues holding back the African continent.”

The video for the song was filmed and edited by Bristol based multi award-winning filmmaker, director & cinematographer Arthur Cauty.

“I thought it was a very powerful, impressive, brilliantly edited video. I was very happy that he understood and liked the message of the song and agreed to re-edit the short film as a music video. I think both the lyrics and the images go together very well and my father would be very proud to see such a video accompanying his poem”, Diawara says.

With the debut album coming out later this year, and a live show augmented with special videos, Afrodelic is looking forward to meeting curious music fans all over the world – starting with Europavox On Air festival this Thursday, June 25.

Features
Europavox: ready for take off!
When you browse on this site, cookies and other technologies collect data to enhance your experience and personalize the content and advertising you see. Visit our Privacy Policy (updated 5/25/18) and Consent Tool to learn more, and make choices about the data used by us and our partners on the site. By clicking "Accept" or by continuing to use the site, you agree to this use of cookies and data.
En savoir plus ou s'opposer