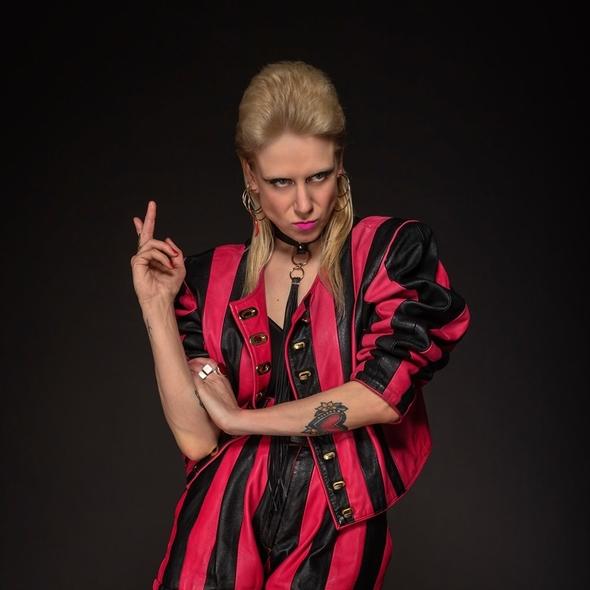 This woman knows how to move, her lips, arms, hair and even her eyebrows. Ankathie Koi dances like a maniac, woman spreading her thighs, exaggerating her every move. She is a natural performer and shows no fear in doing so. Born in Bavaria, but living and working in Vienna with her partner in crime under the moniker Fijukam, she has already established a sound heavily influenced by 80s synth pop. Now her solo full-length is out, and even though Ankathie Koi hates the way you chew (the album title), it is mostly about love gone wrong one way or another.

80s pop is now deeply ingrained in our culture, it seems it is the way jazz, surfabilly or prog rock are. No longer mere retro styles but aesthetics available for artists to choose from, just like dozens of others. Ankathie Koi uses the shiny surfaces of 80s pop, cheeky synths, and faux vibratos in her voice to establish herself as a glamorous woman, successful and absolutely self-determined.

Ankathie likes to play with the themes of her songs live. So in concerts the trio prolongs beats and improvises, giving the audience an invitation to loosen itself in the beat. Expect e-drums, lots of synths and a captivating lead singer always on the edge of the scene.

Electro / Denmark
Be Svendsen
When you browse on this site, cookies and other technologies collect data to enhance your experience and personalize the content and advertising you see. Visit our Privacy Policy (updated 5/25/18) and Consent Tool to learn more, and make choices about the data used by us and our partners on the site. By clicking "Accept" or by continuing to use the site, you agree to this use of cookies and data.
En savoir plus ou s'opposer