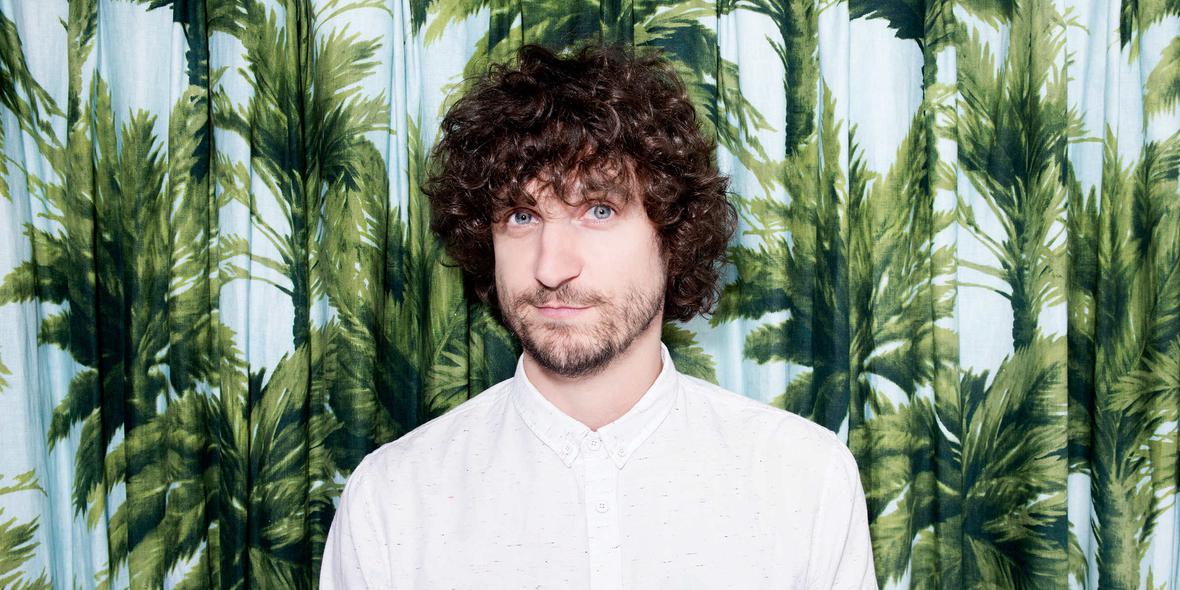 Pop songs which shine brighter than the sun, by Tame Impala's drummer.

Science is unequivocal: without an event of cataclysmic proportions or the intervention of a god of some kind, turning the world upside down is an impossible task. You want summer in December? There seems to be only one solution: cross the Equator, head south and you’ll find warm temperatures and hot sand, luxuriant forests and scorching sunshine.

Unless someone proves science wrong. This someone might be Julien Barbagallo. Don’t move, not even a toe – listen to this man’s second album under his own name, Grand chien, and you’ll immediately forget about the cold and the grim, the fallen leaves, the naked trees, the flu and the bleak faces. Listen to the album and you’ll be transported to where this beautiful soul draws his dreams of radiant pop, a phantasmal realm of sun, ocean, melancholy and tranquility, somewhere between Toulouse, Perth and Alpha Centauri.

Barbagallo’s not exactly a newcomer. He’s collaborated with one of the best French pop bands, Phoenix’s brilliant cousins Tahiti 80. With his friend and genius Julien Gasc, he’s a member of Hyperclean, as well as one of the most exciting French pop ventures of the present time, Aquaserge. But you might also have seen his face somewhere else, on huge stages all around the world, behind Kevin Parker: Barbagallo is Tame Impala’s drummer.

That’s already quite a pedigree. But Barbagallo is also a marvelous songwriter, and Grand chien is an exceptional record. Drawing on the artist’s French roots, it manages to capture the best in classic (and often cheesy) French variété, the genius of Michel Polnareff, the most sparkly hippie songs of Maxime Leforestier, the unrivaled melodic genius of the overlooked Richard Gotainer, and the majesty of ancient Occitan folk music. On the other hand, from Barbagallo’s experiences in Australia and with Tame Impala, Grand chien captures a taste for modernity, for experimentation and invention, lush soundscapes, psychedelic circumvolutions and odd mutations.

The result is a bright, pastoral, evocative album, a collection of dreamy and ever-changing songs – ‘Nouveau Sidobre’, ‘Mungibeddu’, ‘Pas grand monde’ or ‘Le Carquois tchadien’ are all marvelous journeys to landscapes only Barbagallo could imagine. Grand chien is probably one of the best pop records in recent months, French or not, and both hemispheres of the planet are starting to bask in the light of Barbagallo’s unique endless summer.

Pop songs which shine brighter than the sun, by Tame Impala's drummer.

Features
My French Playlist: Barbagallo
When you browse on this site, cookies and other technologies collect data to enhance your experience and personalize the content and advertising you see. Visit our Privacy Policy (updated 5/25/18) and Consent Tool to learn more, and make choices about the data used by us and our partners on the site. By clicking "Accept" or by continuing to use the site, you agree to this use of cookies and data.
En savoir plus ou s'opposer