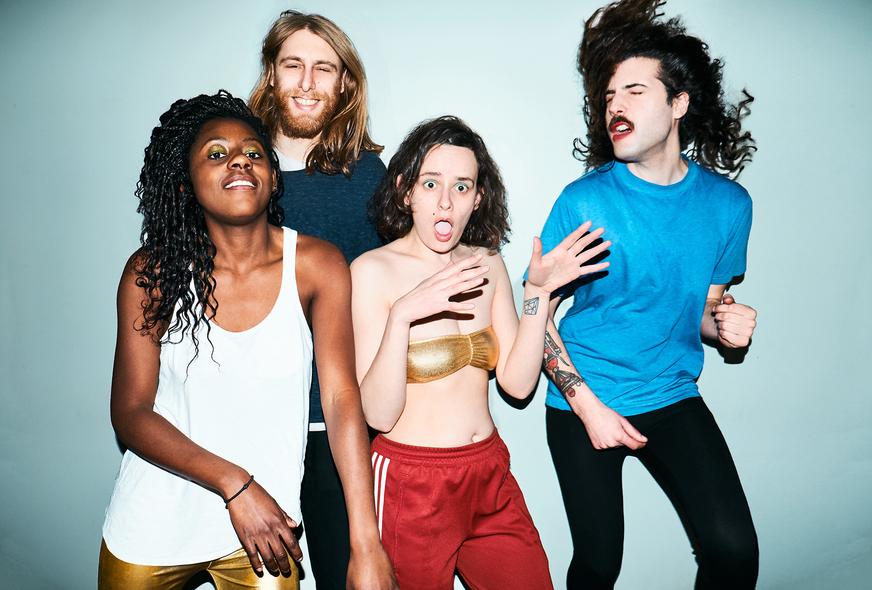 Quite an original band. A punk band in the old tradition of simplicity and aggressiveness of the genre, but with a great little twist: a bit of tenderness. Cocaine Piss is lead by a female singer, Aurélie, playing with three guys, Yannick, Julien and Mathias. A high-pitched voice and voluntarily basic riffs would place Cocaine Piss within the immediate and urinary vicinity of Pissed Jeans, while saturated guitar sound, apoplectic drums, crazy singing on melodies that do not extend over 120 seconds make them an speeding version of the Butthole Surfers.

Texans living in Liège, Belgium, the city where the band is based. A band which also makes good use of a very Belgian sense of humour, close to the nihilistic absurdity of the plastic artist Jacques Lizène, also a Liégeois. The band went to Chicago last year to record their first album, Dancer, a strong series of 14 short and unrelenting tracks. Something close to what would arrive if Joe Ramone’s troupe met Lemmy Kilmister up in heaven, songs which talk about masturbation, about death, tracks like ‘Sex Weirdos’, ‘Cosmic Bullshit’ or ‘Black Speedo’: absolutely nothing here is politically or even musically correct.

After touring the Netherlands, Germany, Switzerland and of course Belgium, Cocaïne Piss spent this year some time in Scandinavia, in the East and in the South of Europe, with inflammable sets which didn’t last for more than 20 minutes – the time needed by The Ramones to play their first album in its entirety. Obviously, the Belgians, a devilish and glittering four-piece punk band, prefer speed to piss or cocaine.

Playlists
Play! c/o pop 2018
When you browse on this site, cookies and other technologies collect data to enhance your experience and personalize the content and advertising you see. Visit our Privacy Policy (updated 5/25/18) and Consent Tool to learn more, and make choices about the data used by us and our partners on the site. By clicking "Accept" or by continuing to use the site, you agree to this use of cookies and data.
En savoir plus ou s'opposer