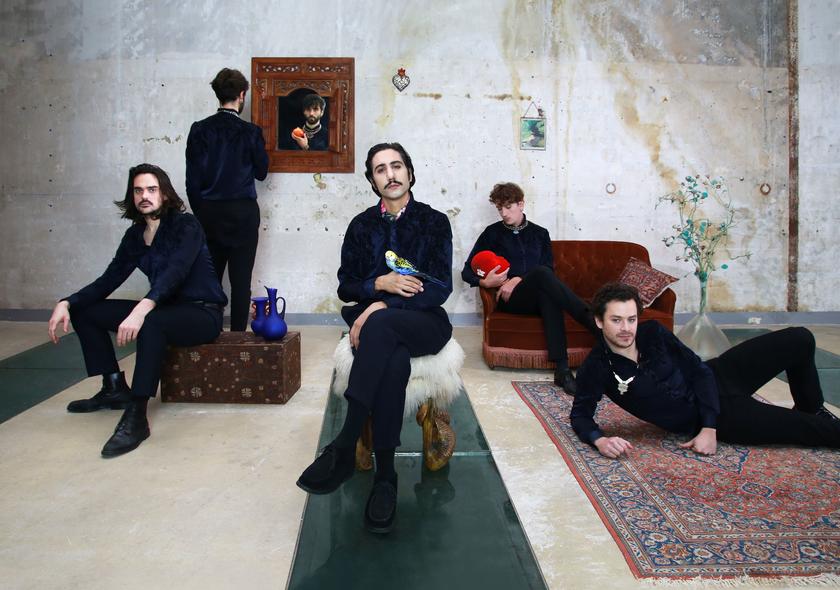 Have you ever dreamt of a band who would be inspired both by 19th century poetry and rock’n’roll? Have you marveled at how wonderful this blend would turn out? This daydream became a reality a few years ago when Feu! Chatterton was founded. Without the slightest hesitation, this Parisian five-piece is the most literate band in French music at the moment. While many French bands avoid their own native language and prefer the easy solution of using English, Feu! Chatterton bravely sing in the language of Serge Gainsbourg and Alain Bashung, with an elaborate choice of words. They are not afraid to revel in their flowery vocabulary. In fact, they are not afraid of anything, whether it be their inventive songwriting, their inflammatory live performances, or their elegant clothes. They take responsibility with swagger and grace.

After a self-titled EP in 2014, these modern-day dandies released their first album in 2015. With its flamboyant songs, Ici le jour (a tout enseveli) is one of the most accomplished records in 21st century French rock. Full of warmth and light, L’Oiseleur (meaning ‘The bird-catcher’), their second album, proves that their creativity is still thriving in 2018. With his pencil moustache and theatrical voice, singer Arthur Teboul is a fascinating frontman, both in the studio and on stage. His mysterious husky tones are often expressed in spoken word, enhancing the quality of their lyrics which quote famous French poets (Louis Aragon, Paul Eluard…). We’re looking forward to seeing what the next step will be for these birds of paradise.