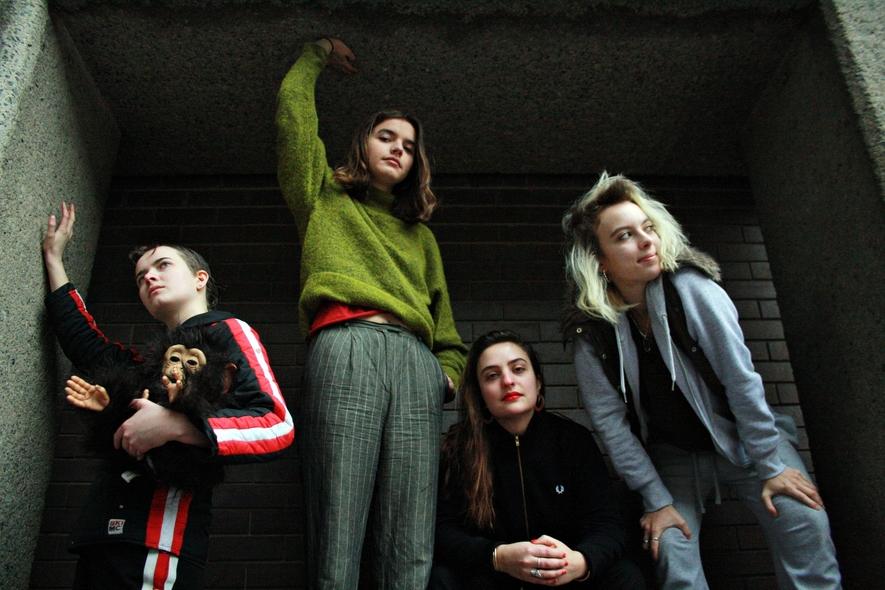 Rock & roll has always been at it’s most visceral when rolling around in the gutter. Dank and filthy, scuttling about in the shadows. This is one reason it’ll never die; like a cockroach, its evolution has made it the ultimate survivor. Goat Girl understand this. Their music has plenty of primordial sludge, but they forgo the short sharp blasts of punk for echo-heavy, reverb-drenched tunes that groove, the bastard children of garage rock and 1950’s Girl Group gold.

Debut single ‘Scum’ didn’t make it past the two-minute mark; in fact, only one of their first four songs did. They don’t like to waste words, delivering concise jabs to both the gut and the brain. But they have smarts and humour too, plus plenty of sleaze. “Touch my body, touch my soul / Touch that deep and disused hole” drawls singer Lottie on ‘Country Sleaze’, her deadpan, dead-eyed delivery all part of the charm. And when they’re taking inspiration from the likes of The Slits, Patti Smith, and Billie Holiday, you know they have impeccable credentials.

Emerging from a burgeoning South London scene that has grown around Brixton’s The Windmill, a scuzzy incubator of bright young talent, they’ve deservedly amassed plenty of fans and critical acclaim. Signed to Rough Trade and with a dazzling debut album ready to go, their defiant anthems and jagged riffs will be sweeping all before them at a venue near you sometime in 2018. Rock & roll doesn’t need saviours, but Goat Girl are doing a damn good job at keeping the flame lit anyway.

Playlists
Play! Top Rock Bands 2018
When you browse on this site, cookies and other technologies collect data to enhance your experience and personalize the content and advertising you see. Visit our Privacy Policy (updated 5/25/18) and Consent Tool to learn more, and make choices about the data used by us and our partners on the site. By clicking "Accept" or by continuing to use the site, you agree to this use of cookies and data.
En savoir plus ou s'opposer