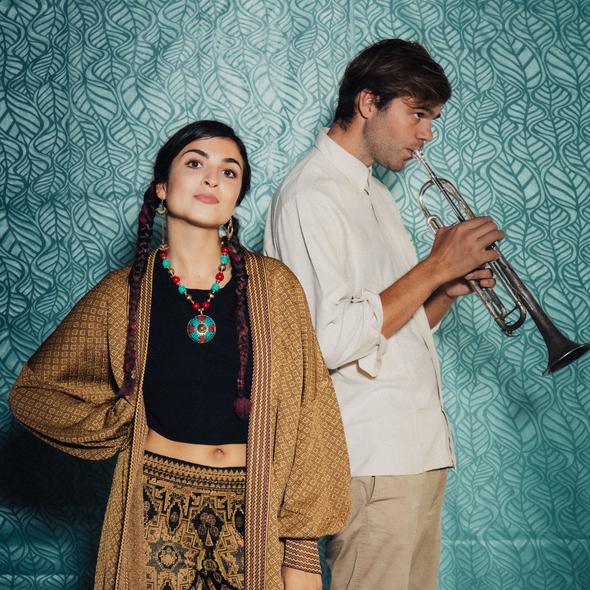 A cheerfully exotic band with roots all around the world

In March and April 2020, when many countries were hit by the Covid-19 pandemic and forced into lockdown, Ladaniva released two videos which brightened up our quarantine days. The first one, for the song Vay Aman, showed the band playing music in relaxed summer clothes, smiling, just enjoying being together around their singer, Jacqueline Baghdasaryan.

Baghdasarayan is the main protagonist in the second video, Zepyuri Nman with her voice and her movements communicating her positive, explosive energy. Although Ladaniva had formed only a few months before and were still a newcomer in the music business, both videos generated more than a million views each on YouTube. The reason is quite simple : this joyful, escapist music is the perfect antidote to the coronavirus blues.

Ladaniva’s music mixes up influences from all around the world, from traditional Balkan music to maloya, jazz and reggae, with strong roots in Armenian folk. It reflects singer Jacqueline Baghdasaryan’s DNA, of Armenian and Belarussian descent. The young woman, now in her twenties, has been living in Lille, France for the last few years, where she has become a singing teacher at the MusicaLille music school. This city is also where she met Louis Thomas, a talented multi-instrumentalist who formed Ladaniva with her in late 2019. This is just the very beginning of their alliance: many more exciting songs will soon be released by the duo and, as soon as possible, we hope to see shows turn into gleeful parties to warm our hearts.

A cheerfully exotic band with roots all around the world

World / Denmark
Mambe & Danochilango
When you browse on this site, cookies and other technologies collect data to enhance your experience and personalize the content and advertising you see. Visit our Privacy Policy (updated 5/25/18) and Consent Tool to learn more, and make choices about the data used by us and our partners on the site. By clicking "Accept" or by continuing to use the site, you agree to this use of cookies and data.
En savoir plus ou s'opposer