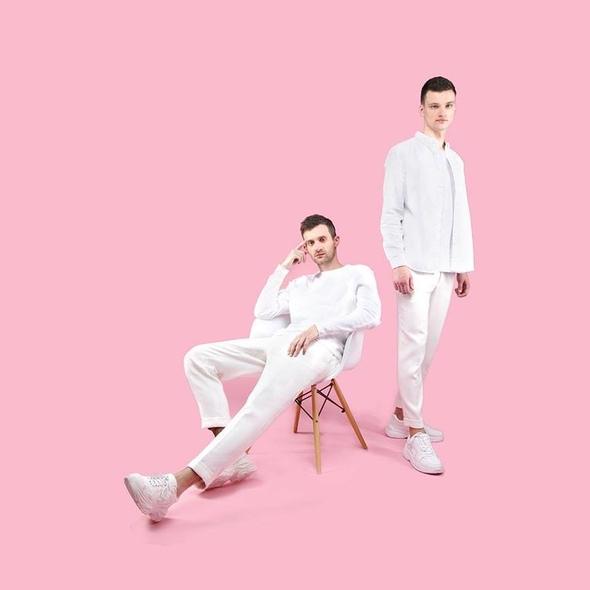 One glance at the press shots of Belarussian duo Tempo Bay tells you all you need to know about which era they’ve mined for their “fresh combination of rock, disco, and electronic”. The ice white colour palette, crisp t-shirts under jackets, and slightly baggy trousers put them firmly in Miami Vice territory (1984), and the music matches up; funk-inflected slap bass, swooning neon slow jams, and a boatload of yacht rock guitar gives their six-track, self-titled debut EP a shimmering nostalgia. You can almost see them cruising down Ocean Drive in a white Ferrari Testarossa.

But their songs are no lazy pastiche. There’s plenty of glitter and good time disco sprinkled throughout their tunes too, particularly in recent single “Disco Ball”, a stylish, energetic romp that updates Studio 54 vibes for the 21st Century. It showcases precisely what they do so well – taking classic, well-worn sounds and coating them with a very modern sheen. It’s music that celebrates the now as much as it’s indebted to the past, a familiar air that still sounds, well, fresh.

Despite forming just a few years ago, they’ve already achieved an impressive level of acclaim in their home country, winning the first ever Viva Braslav MuxOpen in 2018 – a competition for young musicians – playing numerous festivals, and gaining a great deal of exposure, and acclaim, from national radio. An album proper is due for release later this year, as well as a tour around Europe. Time to dig out that white suit and pastel tee.

Playlists
Play! Minsk Calling
When you browse on this site, cookies and other technologies collect data to enhance your experience and personalize the content and advertising you see. Visit our Privacy Policy (updated 5/25/18) and Consent Tool to learn more, and make choices about the data used by us and our partners on the site. By clicking "Accept" or by continuing to use the site, you agree to this use of cookies and data.
En savoir plus ou s'opposer