Past, present, future, trends and styles: an in-depth look in the fundamental art of music posters.

Artwork, a fundamental part of a band’s brand

Trends, as we all know, come and go, and as with music itself, so it is with the art that attempts to communicate via the medium of posters and album covers. Since the late 1960s, bands and labels have always been conscious of the visual language associated with their records and concerts – think of the effort the likes of Led Zeppelin went to – but increasingly, savvy musicians have come to realize that artwork can be a fundamental part of their band’s brand, defining who or what they aspire to be, much in the same way that music videos can be so much more than a mate with a camcorder.

A recent trip to Ljubljana, for MENT, provided an interesting case in point. As part of the festival, the DobraVaga gallery hosted a unique exhibition: 50 local artists were each given a band, instructed to do nothing except listen to its music, and design a poster based on what they heard. The results, as you can imagine, were pretty eclectic; from the weird and wonderful to the downright bizarre, it was fascinating to see what the sounds had conjured in the mind of the artist.

Just as diverse was the range of techniques on display, from illustration to collages and 3D modelling, and the use of colour. Monochrome was common – to be expected – as was an abundance of subtle pastel shades that these days scream “good taste”, but equally striking were the few artists who went full on pop art, assaulting the eyes with a riot of colour and shapes. Just about the only thing missing was plain old photography.

Music posters used to exist for purely utilitarian purposes; the conveying of information, as clearly and simply as possible. Look at any number of vintage concert posters from the fifties and earlier, and they seem remarkably basic – a stock photo of the musician, relatively simple fonts, and all in black and white. But as the 1960s started to swing, minds became more creative. Images became more stylized, and artists experimented with the shape and size of the text. Fast forward to today, and there’s a dizzying array of styles and motifs commonly employed, some simple, some complex. And while it’s difficult to group them in any meaningful way, style being a very personal and nuanced subject, it’s possible to trace a few general themes through some of the most memorable recent examples.

Hand-drawn and hand-painted posters – a back-to-basics approach utilizing simple, stylized images that calls to mind old, easy-to-photocopy flyers and fanzines – are still prevalent, but not as much as they were around 2011 and 2012. Instead, the style has morphed into one of illustrated ornamentation, with intricate and colourful details to the fore that borrow heavily from the realm of realism. The subject matter, being so vividly illustrated, is frequently larger than life or otherworldly, the complexity a chance for the illustrator to showcase their skills.

Particularly interesting to note is that while hand-drawn styles looked back in time and to images of nature and pastoral bliss – animals were very common, along with Roaring Twenties figures and scenes – posters are now far more future orientated; space and science fiction feature heavily, as do Ballardian depictions of dystopian modernity. This trend has also bled into other areas of art and mass media, the realistic rendering of things that do not exist deliberately blurring the distinction between fact and fiction; witness, in the wake of fake news, the rise of the fake image, now so skilfully done that it even dupes mainstream news organisations. 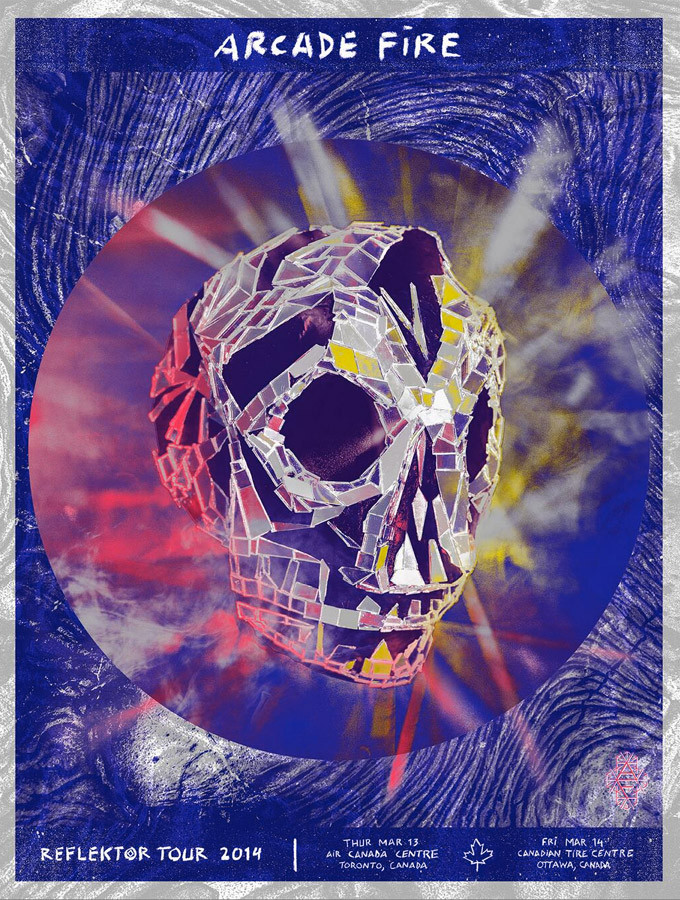 Another key trend has been a shift away from the obviously digital or overtly modern to something that, outwardly at least, bears the hallmarks of being hand-made. 2016 was the year of hygge – the untranslatable Danish concept that equates roughly to “cosy” – and as with food, furnishings, and fashion, the shiny, hard edge of modernity in art and branding has been replaced with something softer and more organic. Pantone has already decreed Colour of the Year 2017 to be Greenery (15-0343), and along with the ubiquity of “Millenial Pink”, it’s clear that homely pastel shades and subtlety are very much in.

It’s a style that marries the woozy, faded Instagram-filter photos that were so popular a few years back to the retro rendering and colour schemes beloved by film director Wes Anderson, particularly those of his last outing, The Grand Budapest Hotel. Often, the poster will deliberately show the process of screenprinting in the work, lending authenticity and a homely quality. It might also bear hallmarks of a layered collage, adding images on top of each other, as if the whole thing has been constructed in a somewhat haphazard fashion. Such a process also allows an artist to combine multiple illustration and design styles in one piece which, when done in a skilful way with clever layers, adds depth to the poster and draws the eye in.

While a lot of design is now orientated towards the web and online rendering –trends in this area for 2017 include louder, brighter colours, minimalism’s return to its roots, and bold typography – posters have the advantage that they’re not competing for microseconds of attention in a vast ocean of content, and as such, artists have far more scope to give their creativity free reign. However, that’s not to say that certain trends aren’t shared across platforms.

Halftone realism, and the use of authentic, original photographs continue to feature prominently. With the former, muted tones are used to recreate photographs and images in a hyper-realistic way, high contrast and a wide range of colours adding depth and detail. Landscapes, scenery, and industrial vistas are commonly used in this way, as are portraits, with typography incorporated directly into the image. It’s a clever way of challenging the viewer regarding notions of authenticity in the digital age, and is a technique also commonly employed for movie posters and book covers.

One further key trend that has emerged recently is the use of quirky, playful typography, particularly those designed to mimic handwriting. Unlike online, where resources such as Google fonts have proven exceptionally popular, for posters, artists have far more scope to play around with the form and placement of words. Apps such as Glyphs and Word Swag have brought a whole range of font features and designs to the mainstream, and artists have been quick to understand that typography need not only be for reading – it’s for making a statement too. And it’s not just the size used either; drama can be created through texture, arrangement, and colour. 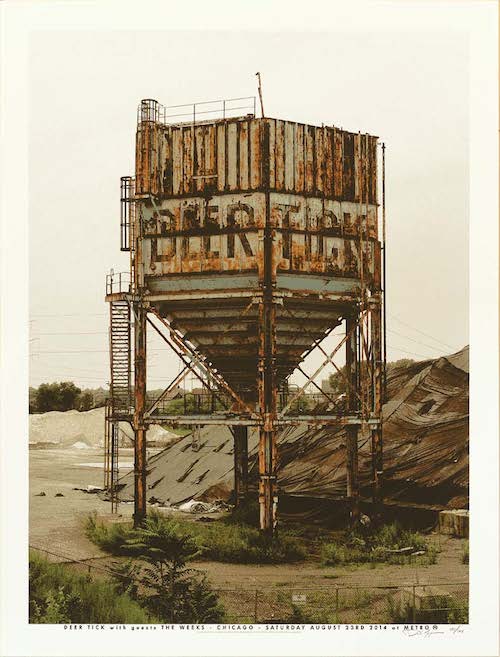 Finally, and something that’s been noticeable for a few years now, there’s the concept of “modern retro”. Before, anything branded retro or vintage usually plundered the 1960s and 70s – or even earlier – for inspiration, whereas artists are now looking at more recent history for stylistic ideas. Early PCs, pixel art, video games, and 1990s fashion and culture have all been repurposed in a style that’s usually tongue in cheek and nerdy but humorous.

This year’s most anticipated TV show is the return of Twin Peaks, a series that was already hugely influential in the world of music and culture in general, and the iconic imagery of the show, along with the rest of David Lynch’s work, is ripe for clever re-imagining. Expect to see posters referencing surreal, small town America on a wall near you soon. 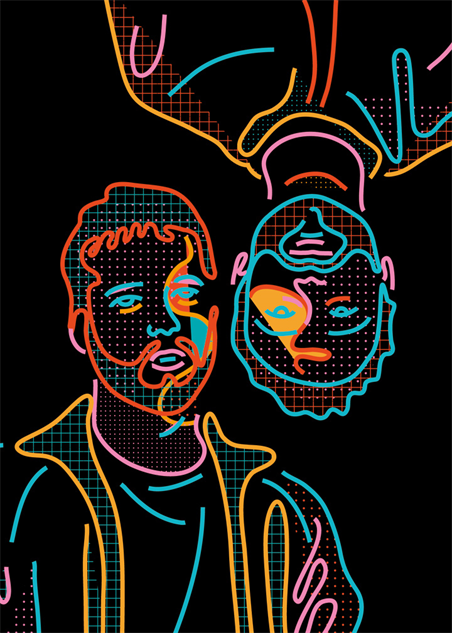 The Greedy Pig by Marina Esmeraldo 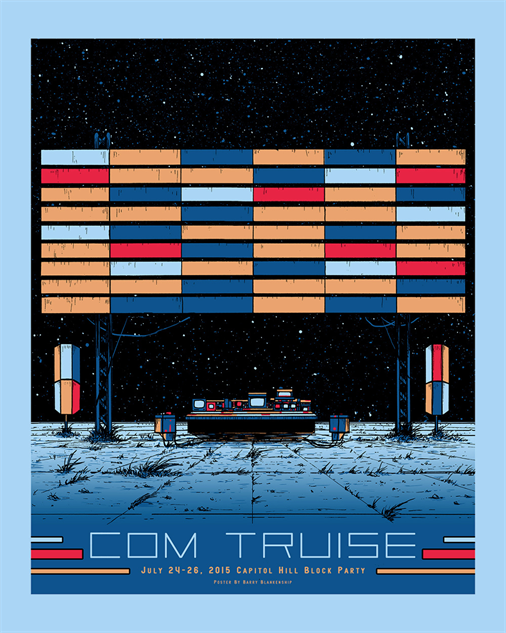 Below are some of the posters shown at the 50_______LIMITED EDITION MUSIC POSTERS exhibition, which took place during MENT at the DobraVaga gallery in Ljubljana. All 50 posters can be seen here.

The Ills by Marko Šajn