No future but a wall to tear down: here’s the history of ‘OstPunk’, an often forgotten scene.

No future, or too much? The urgency contained within punk ideology was never as prevalent as it was in East Germany. Whereas punk traditionally played on nihilism, behind the iron curtain it grew to represent a changing of tides through the anti-establishment clique. Those who played in punk bands ran the risk of imprisonment, and more, but as a movement, it helped further radical, social change. This is the brief and very abbreviated tale of an often forgotten scene.

In East Germany, the arts and media were heavily policed by the GDR government, limiting the amount of western influence people were exposed to. The late 1970s was a period in which punk music was spreading across the world. It was also a time when East Germany was in gradual economic decline.

Punk music from the West was first discovered by those picking up British Forces Broadcasting Service radio, listening to John Peel’s BBC show. It set off a series of events that saw punk bands, and the idealism the global movement stood for, begin to cause controversy in the authoritative state.

“In Berlin, young people dressing like punks became visible in East German cities by 1981,” states Seth Howes, co-editor of Beyond No Future: Cultures of German Punk. At first, performing in punk bands was strictly forbidden, as the state decreed what and who could play in public, using this prerogative to keep punk bands out of the limelight. And anyway, getting permission from the government was a very un-punk thing to do. Those who looked to subvert the system risked imprisonment. And many were.

“There was outright arrests and interrogations,” Howes explains. Punk musicians risked everything. Incarceration, detainment, and even having their apprenticeships or future careers taken away from them. In certain cases, those detained were asked to become informants for the secret police, and many bands of this era featured collaborators as their key members.

“Every punk in East Germany risked everything: not only his present situation, but also his entire future as well” – Too Much Future

“Watch out, you’re being watched by the Mf Mf SS!”

Punk, as an ideology, embodied the social movements of the time, along with various artistic lifestyles, including squatting and environmental activism – ideas that were growing globally, in ever more complex times. In East Germany, punk music became a vehicle to voice disdain for the government. Living in a state with oppression, and economic decline, actually meant that there was ‘no future’ for many of the country’s younger generation. Some of the first East German punk incarnations have become iconic symbols of rebellion, embodying these global Dadaist expressions; bands such as Planlos (Aimless), and Namenlos (Nameless). Their style was far more visceral and political compared to bands on the other side of the wall. A radical, underground movement.

“In retrospect, certain crucial moments for East German punk came in 1983,” explains Howes. In April, the first punk festival took place in the city of Halle, featuring pivotal bands of the era, including Planlos, Namenlos, and Müllstation. While the Stasi failed to prevent that festival from occurring, they intervened later that year, when Namenlos performed their song ‘Mfs-Leid’ in Berlin, a track that was brazenly critical of the secret police, comparing them to the Nazis (“Watch out, you’re being watched by the Mf Mf SS!”).

The members of Namenlos were imprisoned after this, with their performance of the song a key point of contention. Artists protested in the streets against their arrest and much more were arrested when petitioning for their release. Something was beginning to stir.

1983 saw the state crackdown on punks with renewed vigour. “The criminological approach was to make the scene invisible again,” Howes states. Offsetting this attempt at policing punk were the efforts of the Protestant churches, which had offered shelter to punks at the beginning of the decade, providing a haven and spaces to perform, and in certain cases, even beer. They became the venues for punk festivals throughout the country, and even played host to Die Toten Hosen – West Germany’s most famous punk band – who were sneaked across the border on a couple of occasions.

“The church was soon totally overwhelmed by the mess we caused,” states Michael Boehlke from Planlos in an interview from 2011. Alongside Henryk Gericke – another prominent ‘80s East German punk figure – Boehlke established the first gallery exhibition dedicated to the GDR punk movement in Berlin in 2005, entitled ‘Ostpunk – Too much future’. The exhibition started as a reaction to the growing trend towards Ostalgie – nostalgia for life in East Germany. Boehlke and Gericke were keen to remind people of the state-sponsored oppression during this period. 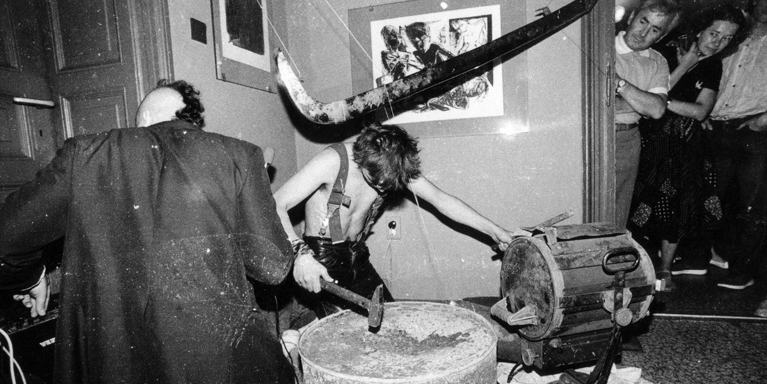 ‘Too Much Future’ archive

As the GDR attempted to regulate what people were allowed to listen to, it struggled to keep up with growing cultural trends, and with the political tide turning, the authorities had their attentions focused elsewhere as punk music became more prolific. It was towards the end of the ‘80s that the state-run label Amiga began to release music from the East German punk scene. “You have these cultural bureaucrats looking at actual consumption, trying – struggling, really – to figure out how to make expanded offerings work with their limited resources,” Howes describes.

“That’s how you get this paradox in the ‘80s when you get this attempted liberalisation of music in the radio and recording industry, on the one hand, and continued police surveillance on the other.” Initially, Amiga released records by western artists Bruce Springsteen (1986) and Depeche Mode (1987), and in 1988 the label added a compilation of East German ‘alternative acts’ entitled Kleeblatt Nr. 23 – Die anderen Bands, featuring Feeling B (whose members would later go on to form Rammenstein), Sandow and WK 13.

In 1989, Amiga released Hea Hoa Hoa Hea Hea Hoa, by Feeling B, which later became recognised later as the first official punk album to be released by the East German state.  “They didn’t call it punk,” explains Howes. “You could have a thing that looked and sounded like a punk band, but was not proudly marketed as one.” A lot of these independent bands had received official categorisation and state legislation to perform. A typical punk paradox, but at the time many acts felt like they had no choice if they wanted to perform. Not all bands bent to the state, however.

In 2009, journalist and author Tim Mohr discussed the cultural impact of punk music on East German socio-political change in an article entitled ‘Did Punk Rock Tear Down the Wall?’ It’s a question posed by many, but the reasoning behind the Iron Curtain’s demise was far more complex. After a while, even the Berlin Wall had no future.

“It would be very difficult to make a case for punks – who never numbered more than a few thousand people in the GDR – to having made any sort of inroad into the basic political or economic foundation of the East German state,” Howes responds. Instead, Howes attributes the collapse of the GDR to its economic demise and inability to practically implement its theoretical ideals. “Despite outward appearances, this is not a state that is stable in 1981 when punk appeared. It was struggling with a generational transition within its leadership [and] while there is some disagreement about when the turning point came, certainly by the early 1980s the economy had ceased to sustainably function.

“East German punks were not reformist socialists. Nor were they proto-capitalists longing for a market. To suggest that punk precipitated massive change overstates its political impact on the system, even if the state itself devoted tens of thousands of man-hours to the observation and suppression of something that never organised itself as a serious threat.” 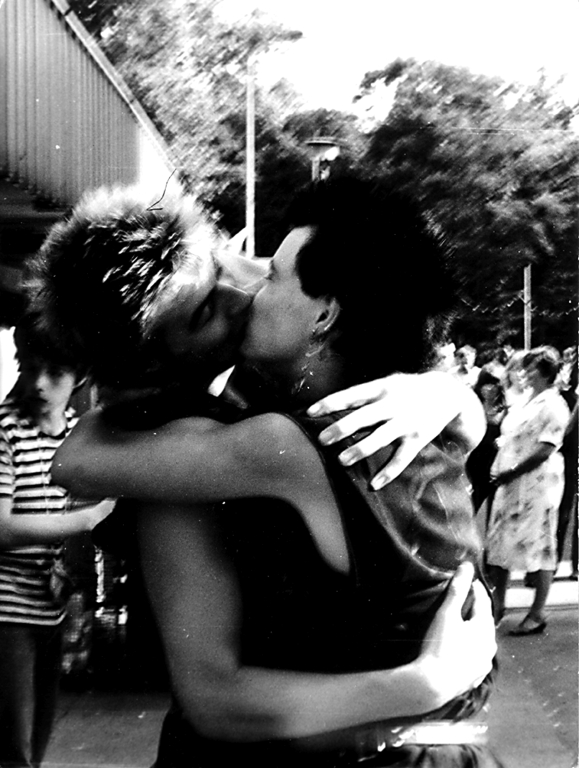 ‘Too Much Future’ archives

Holiday in the sun

Long after the reunification of Germany, the scene is often forgotten. East German punk bands are arguably lost to the annals of time. Victors on right side of history, but in the global context of punk music the likes of Namenlos and Feeling B are rarely discussed. During the early ‘80s, however, East German punk music was receiving plenty of attention from the West, with editorial space being given to the scene by the likes of West German publications TIP and Zitty. As Western journalists gazed eastward, records were smuggled across the border in the other direction.

One such release was the 1983 split LP DDR von unten/eNDe by Zwitschermaschine, and Schleim-Keim – a record that placed the abbreviation for Neues Deutschland within the word for ‘end’ (eNDe); an open criticism of the East German premiere newspaper that enclosed the famously boastful, future-oriented newspaper’s name with a word expressing finality.  The record was reissued by West German imprint Agressive Rockproduktionen, whose commentary on the inside sleeve discussed how the myopic idolisation of the East German punk scene had led many to ignore the West German government’s censorship of similar music. Punk itself was a global movement, one that was not limited to East Germany.

When it comes to punk, the notion of East versus West plays into this idea that the two sides are distinctly separate. The theory that punk originated in the West and then spread across the globe is contested by Howes. “Golnar Nikpour (historian and author) puts forward that when talking about the history of punk we often see it emphasised as moving in one direction, from the West to the rest, and by implication from novel and original in New York and London, to belated copy everywhere else.” Howes states.

“But Nikpour asks the really intriguing question: what if punk is something that circulated multi-directionally between global cities in the late ‘70s, and changed as it did so? If we focus on its international interconnectedness and how local punk scenes picked up on developments abroad, remaking new sounds to fit their own interests, we can instead learn about what it meant to live in a city during a moment when there was so much fast feedback flickering between metropolises.”

Although it sat behind a wall, East Germany was far from cut off from the world. Anarchy in the EU was not limited to just one state. It was a product of a time packed with ideology and bereft of a future. Punk itself was a product of the global interconnectivity of cities across the world, as the youth became further informed of changing, global, socio-political trends. “It’s not so much about what the East Germans copied from the West, it’s saying something about what it was to make punk your own in the GDR.”