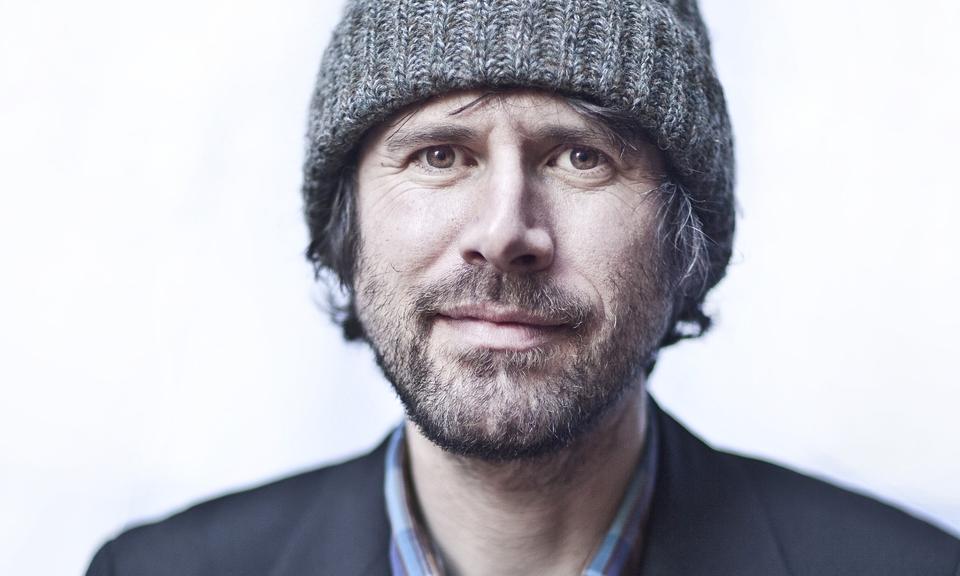 A few weeks before Brexit, the pop genius and Super Furry Animals mastermind Gruff Rhys released a marvelous love song dedicated to the EU: the Welshman tells us why the Union matters so much to him.

"A citizen of the EU"

What can you tell me about I Love EU? How and when did the idea of this song come to you?
The song came first and once the idea for the title was hatched it kinda wrote itself, with a key change for every verse for extra passion. It’s obviously a terrible pun, but my general feeling is that protest songs can be more palatable if they are subverted by a sense of the absurd. I think the idea came to me whilst I was trying to fix my digital radio – I was in a daydream.

How important has the EU, or more generally Europe, been in your life?
I’ve grown up as a citizen of the EU so I have an emotional attachment to it, and on a practical level as a musician have been able to tour freely without having to fill forms and get searched at every border, and members of my family have been fixed-up by hospitals in far flung corners without having to pay mad bills. I believe in the possibly illusory idea of the Utopian social Europe that built bridges between cultures after the disaster of the Second World War – a catalyst for peace.

How did it impact your philosophy, your vision, your culture?
My first language is the Welsh language – a minority language that’s under threat – so an inter-cultural union of equals as opposed to the old colonial, centralist model of government is very attractive for me. The reality of an EU based on corporate values superseding those of its citizens and their sovereign states is therefore hard to take and is at odds with this fantasy – so I’m drawn to movements such as DiEM25, who are championed by significant European thinkers like Varoufakis, Brian Eno, Žižek, who believe in a reformed European project that protects our fragile societies and ecosystems. Wales has benefited greatly from EU membership over the years in terms of environmental safeguards and infrastructure projects, and also in creating networks of pan-European minority languages. So its impact on me personally, I feel, has been a very direct and rewarding one.

How did you feel when the result of the British referendum on the EU arrived? Did you feel you had lost something, a part of yourself?
I put my energies wholeheartedly into supporting a Remain vote as it was a simple yes or no question. So my song ‘I Love EU’ responded to this simplicity – my beliefs are much more nuanced. I think it was insane that Cameron called a referendum over internal Conservative Party bickering. Therefore it was extremely hard for people like me and many of my friends who don’t support this right wing party to motivate each other to campaign on the same side as Cameron, the millionaire architect of cruel austerity policies. My general feeling that a vote to Remain was a vote against fascism and xenophobia was my biggest motivator, in fact. I think the Leave vote instantly unleashed a toxic wave of openly xenophobic behaviour.

Being Welsh and British, how do you see the future now the UK has chosen to withdraw from the European Union?
I think we’ve gone through a kind of coup by the increasingly extreme right wing media – it’s beyond idiotic. For the time being, of course, we are still in the EU and there are many legal challenges ahead. It’s often forgotten how close the vote was and for now everything is worth campaigning for. Obviously the vote has changed political dynamics within the UK, too, with different countries voting for different outcomes which may will also lead to new political scenarios. Scotland and Northern Ireland voted to stay in the EU, of course. Five years ago it would perhaps be unimaginable that Wales would vote to leave, but of course digital media has changed the game unbelievably and our post-industrial society is crumbling in many ways under the severe austerity policies of Conservatives in Westminster.

What could the EU lack to be more attractive and to feel more real and useful for its Peoples?
In comparatively affluent societies in northern Europe the right-wing populist movements have been able to blame Europe for many of the ills that have actually led from the austerity policies of the very right wing governments that those very media barons helped install, whilst in countries like Greece, Éire and Portugal the EU have colluded in enforcing very brutal austerity on its people as part of the Troika, so as a vast governmental bureaucracy it’s never going to be loved. I guess the key is to just educate everyone of the diverse wonders of the European patchwork quilt; I think if there were schemes to encourage more cultural exchanges and travel within Europe for communities that are perhaps not the most affluent, maybe it would help. Ultimately it’s about redistributing wealth more effectively in general.

What would be your favourite European bands?
Well I guess Germany is a musical powerhouse with a tradition in techno and futurism, and in Can probably the greatest and most innovative band of the rock era. France has the great songwriters and the disco pioneers, but also the radicals like Brigitte Fontaine. Slovenia had the socialist era art punk underground that nurtured the austere absurdists Laibach. Greece gave us the ornate columns of Aphrodite’s Child and Vangelis. Italy gave us the best cinematic soundtracks ever, Italo disco and the pan-European colossus Giorgio Moroder that made Germany his working base and inspired the French disco revival of Daft Punk. Belgium gave us not only industrial electronics but also the pop glory of Technotronic’s ‘Pump Up the Jam’, and beyond the platitudes of ABBA, Sweden gave us communal free rock and catchy songwriters like Pugh Rogerfeldt. The Balearic islands invented the eclecticism of contemporary music and Éire gave us My Bloody Valentine. My favorite album of 2016 was by Poland’s Małgola No. This is just a snapshot – on another day I would mention other names.

"The beauty of culture shock"

What’s the most amazing place or city you’ve seen in Europe? And what about the most exotic, strange or scary one?
Well nowhere should be scary to anyone but of course there’s always a first time to travel when everything seems exotic. In fact, the beauty of culture shock is that it returns you to a child-like state where you don’t have complete command over your experience of the world. When I was four years-old my parents took me and my brother and sister to Brittany to a Celtic folk festival. This is my first memory of life beyond Wales. We met a family at a Breton bookshop who invited us to stay at their flat. We went to see Alan Stivell play the electric harp; I fell asleep. These were weird fantastical times.

If you had to move from Wales and to choose a new European home, where would you love to live?
I spent some time living in Barcelona and that was a very life-changing experience. It’s such an inspiring, multilingual, living city.

Maybe a country for winter, and another for summer?
Well that would be very decadent.

What country you haven’t visited yet would you like to go to?
I’ve been lucky to play shows in many countries but there are many I’ve never visited, especially in the old Eastern Bloc. I just mentioned Slovenia – I’ve never been – maybe I should go there!

You mention food a lot in ‘I Love EU’. What’s the best meal you’ve ever had in Europe – the tastiest thing you’ve ever eaten?
There’s a restaurant in Milan dedicated to the Italian singer Mina – all the decorations are images and paintings of her – and her songs play in the background. The food lives up to her reputation!

And what’s the worst thing you’ve ever tasted? What was it like?
Well – I guess I’m always grateful for food!

In what country and venues or festivals did you find the best catering?
For touring bands, France is on a different level to everywhere else. I love how all the staff at the venues will sit down and eat an amazing meal with the bands before a show, it’s very communal and thoughtful. The UK is notoriously bad for a touring band – you’re given crisps and warm beer if you’re lucky!

Where would you find the best audiences?
For me personally Dublin always stands out. People are very passionate and will sing every word, even if they’ve never heard the song before!

What’s the strangest band you’ve seen on stage while touring Europe?
I recall playing with a Scandinavian band at a festival who seemed pretty far-out to me – they were a kind of metal band with fancy dress element. I don’t recall their name, unfortunately. Super Furry Animals or something…

What is, in your opinion, the nicest European language?
All languages are nice – it’s a shame when languages are stereotyped into having negative characteristics! It’s obviously very subjective; the kind words of a parent will be comforting in any language, I imagine!

What’s the worst experience you’ve had while travelling on the continent?
Even in Schengen there’s the odd hitch, like when the Italian police raided our tour bus by lowering themselves in through the skylight!

Features
The healing sound of music
When you browse on this site, cookies and other technologies collect data to enhance your experience and personalize the content and advertising you see. Visit our Privacy Policy (updated 5/25/18) and Consent Tool to learn more, and make choices about the data used by us and our partners on the site. By clicking "Accept" or by continuing to use the site, you agree to this use of cookies and data.
En savoir plus ou s'opposer