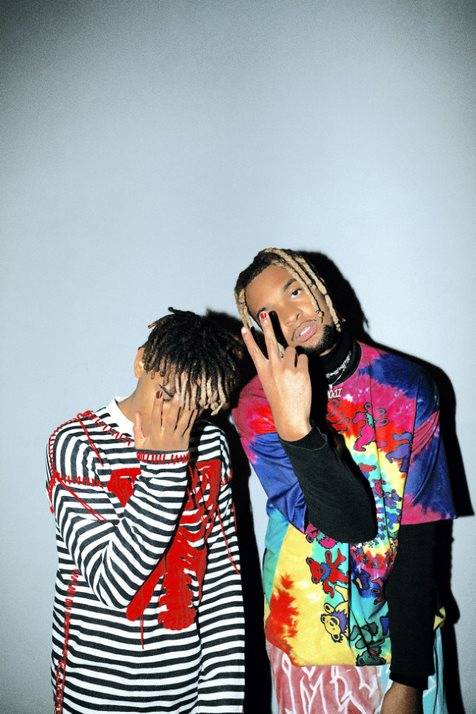 In the exciting, ever-expanding Belgian rap scene, Moji x Sboy are promising outsiders. Cleverly unclichéd, they meld their spoken word vocals (in French) and minimalistic beats with a strong pop and rock background to their melodies and instruments. The duo’s songs incorporate unusual elements, such as delicate piano chords, or acoustic guitar arpeggios, giving a sense of joyful playfulness. Don’t count on them to write macho lyrics: these two young men seem comfortable expressing their personal feelings about love, simply and sincerely, without being over-sentimental. The result has echoes of Clairo or Girl in Red, two young female artists they feel close to, who play lo-fi, bedroom pop. Moji x Sboy’s influences also include Post Malone and emo rappers Lil Peep and Trippie Redd.

The aliases Moji and Sboy were invented by two childhood friends from Liège, Belgium, so closely bound that they feel like brothers. In late 2018, they started their first act together, and quickly came to the attention of millions of viewers on YouTube, with songs like ‘Regarde-moi’ (Look at me) and ‘Pas Comme Elles’ (Not Like Them). Their hit single ‘Ma Go’ (My Girl) even became a gold record in March 2021 – an impressive achievement. In June 2021, they released ‘Temps d’aime’ (Love Time), their debut album, with the help of Belgian beatmakers Ozhora Miyagi, Luv Resval and Louis Dureau… These newcomers definitely have their own voice, their own style and their own refreshing outlook on hip-hop.